I woke up at 6.30am, opened my bedroom window and just had to set my camera up for a timelapse. Because what I saw was this…

I’ve been working for a US show called ‘Househunters International’ for a number of years now and they send me to lots of great locations to film people who are relocating from one country to another. For those who’ve not seen it, it’s a cross between a property show and a travel show. It is shot initially for HGTV in the U.S.A and is also shown in 17 other countries worldwide. So when Leopard Films told me they wanted to send me to the Sahara Desert in Morocco for their spin-off show ‘Off The Grid’ or OTG, I was super excited. We were to film Karen Hadfield in her search for a property suitable for turning into an artists retreat. www.cafetissardmine.com

As I packed kit and clothes my text conversations with Director Alicia Piav, Producer Erin Fitch, and Sound Recordist Ray Hill seemed to revolve mainly around what the best ‘desert song’ would be; the boys going more in a sound-scape direction, and the girls in a more songs-about-deserts direction. We’d been told that after landing in Morocco and an overnight stay in Marrakech, we would have an 8 hour drive up and over the Atlas mountains, then to Rissani and then finally arriving at our hotel at the foot of the World Heritage site that is ‘Erg Chebbi’. It actually took more like 11 hours as we stopped a few times to film, and reset the GoPro cameras into different positions. Oh, and we got lost at the end bit. Literally lost in the desert. In the dark. We got to Hotel Yasmina at about 10pm.

The main camera I use for this show is the Canon EOS C300 with EF mount and lenses. I also use a Canon EOS 5D Mark II as a B camera. And we use GoPro Hero 3s for in-car filming. Having bought the C300 last year to film a BBC kids show called Jedward’s Big Adventure, it took me a good couple of months to create a rig that worked well for all the handheld shooting I do, and I went through a few different configurations until ending up, as most cameramen do, with a good mix of manufacturers. I’ll go into my rig in more detail in another blog entry but for now the basic list is: 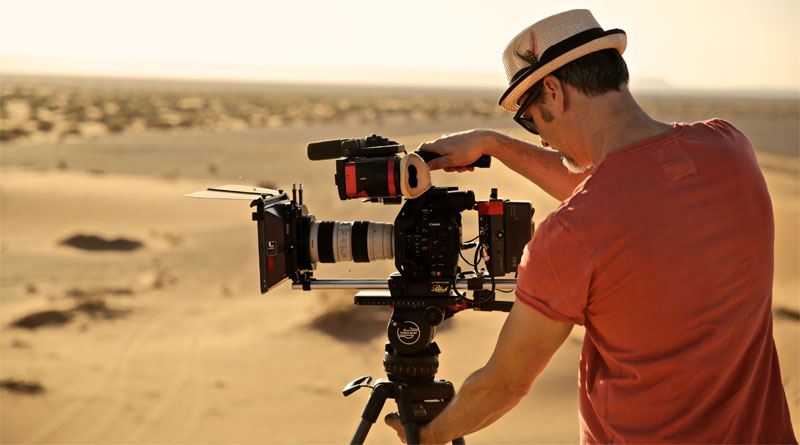 On our first day Ray an I were in Toby’s car – Toby Wood. Alicia and Erin were with James – James Cutting. Toby and James were our local fixers and although Toby is English he’s lived in Morocco for 40 years and is fluent in Arabic and French. And He puts on Pink Floyd – Shine on your crazy diamond. A very good desert track indeed, especially the first couple of minutes.

Morocco is a ATA Carnet country so I wasn’t able to change or alter any of the larger kit items. However there were 4 smaller things I thought of taking that I was very pleased about, and 1 that I didn’t and wished I had. When filming in the desert you expect it to be hot and dry, but what I didn’t expect was how windy it would be. For 5 out of our 7 shoot days the calm and sunny mornings gave way, at about 3pm, to very high winds. And with the wind came dust and sand. A lot of dust and sand; coming down, up, sideways and through. So firstly my rain cover went straight onto the camera. Because of the shape of my rig I find a rain cover designed for Sony PDW-f800s or PMW500s works best. And then when mounted on the tripod I stopped up the gaps using lens wraps and gaffer tape.

The other ‘sand in the camera’ bit of kit to talk about here is batteries. I used the smaller Canon BP-955 purely because you can shut the battery door properly, unlike with the larger BP-975 or Swit S-8845 equivalent. I tend to use my IDX V-locks to power both C300 camera and Terradek Bolt wireless transmitter, when monitoring for a director is needed; and the internal camera battery when it’s not. 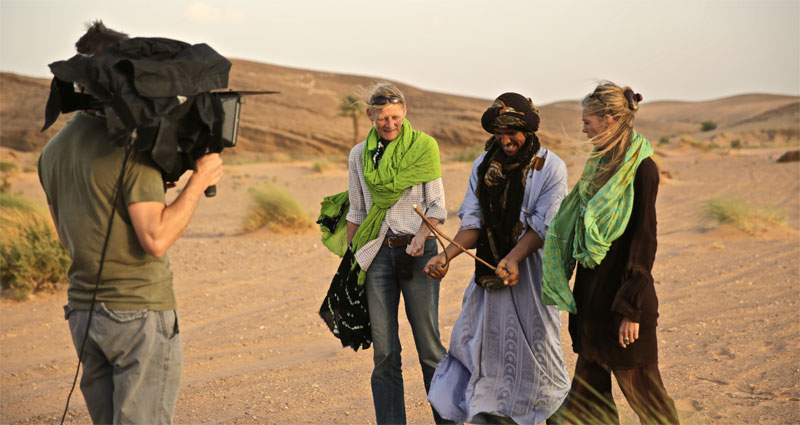 Filming in the wind and the sand

Even with the rain cover, lens wraps and smaller batteries, the sand got in, and the third thing I brought with me was lots of canned air. Each evening I would blow all the sand away from all the kit. It was at these times, in between wrap and dinner that Sayeed would come chat with us. He worked for the hotel, and also as a camel guide. He told me he could speak not only English but Australian and American as well.

“Oh how lovely! That is Amayyy-zing!” English

It must be pointed out that all these phrases were actually said in exactly the same voice and accent.

As it turned out one of our local fixers – Toby Wood – thought to carry an air compressor in his vehicle, which we ran off the car battery. It wasn’t as powerful a jet as the canned air, but it was an unlimited supply and also came in very useful.

And then the fourth thing I brought and was pleased about was a large 48” Lastolite Reflector – as well as my normal 38” one. So when conducting interviews outside I would use one reflector in the usual manner, and then the larger one as a sunshade, with a sand bag I had brought over from the UK; empty I hasten to add. There was plenty of er… sand to refill once on location.

I never realized the roads – well tracks – would be quite so bumpy. They looked and felt corrugated. All the kit was bumped and bounced around loads and I ended up holding the camera on my lap the whole time. We were also bumped and bounced around, which we all got used to. Until I got ill that is. After waking up and visiting the toilet a few too many times I thought I would soldier on, and we filmed a great set-up on the main 1000’ dunes with the contributors on camels. We only had to break twice for me to take a quick trip behind the nearest dune. At the next location I lay down and didn’t get back up again. High fever, shivers. Anyway, they drove me to the local hospital and put me on a drip with a mega dose of paracetamol.

Wasn’t quite sure where I was for some of it, and it all got a bit weird, with a couple of local women looking in on me and just laughing and laughing. Alicia my director was brilliant, as were the contributors Karen and Jess – dubbed Patsy and Patsy, by their own volition – very Ab Fab. On the journey back to the hotel whilst I was lying on the back seat of the car talking rubbish, we had to make two stops. Firstly we had to stop so that the others could buy beer and wine. It seems you can never be too ill to stop a film crew stocking up on booze when they have to stay in a dry hotel. And the second stop was a rather urgent call of nature for me. Praise God that in a landscape that was as flat as a, well a desert, they managed to find a small pile of stones about 4’ high for me to crouch behind. It didn’t take long for someone to christen it ‘Phil’s Hill’.

I had to stay in bed for the rest of that day and the next, but was good to go after that and we shot some great stuff in the local Souk in Rissani. Whilst filming I put Ray on ‘Donkey watch’. Any time he saw a donkey pulling a cart or a donkey laden with produce we just had to film them. We also witnessed a brilliant shouting match between two date farmers, it was proper kicking off!

The one piece of kit I didn’t have and wished I had… was a pair of sand goggles. I got so fed up of the sand in my eyes that I ended up wearing my swimming goggles, complete with blue tint. It was the only thing that worked and by that stage I didn’t care if I looked stupid or not. 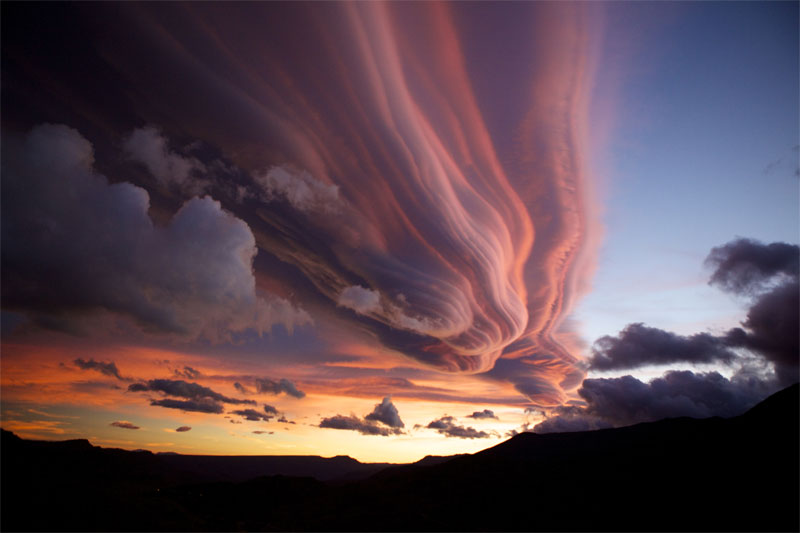 The sky over the Atlas Mountains on our drive home

Morocco was truly amazing. And by the end of 11 days of sand and wind and illnesses we were very ready to head home. Erin got poorly too, hence her choice of desert song below. After another 12 hour drive and some unbelievably beautiful skies we arrived back in Morocco for one more night at the Lovely Riad Kasbah before heading home.

What a very beautiful landscape, and what a privilege to go there to film it. I left a little bit of me behind in morocco. And I don’t just mean behind Phil’s Hill. 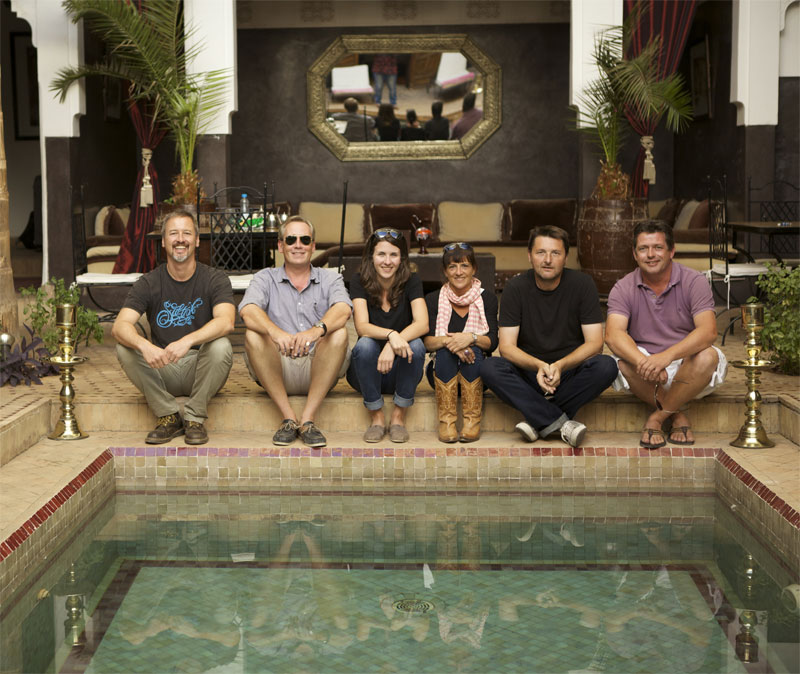 Alicia: America – A Horse with no name

James: James actually wrote a song about Ray – and sang it to Ray on our last night at the hotel. That is and will forever be his desert song.